There are plenty of ways to succeed in life, and plenty of ways to define what success means. For Kelly and Virginia Holthus, it's not very complicated. Success reveals itself in an average day, which begins early, just like it did on the farms where they grew up.

From Country School to Cornerstone: The Holthus Family of York

Kelly Holthus got his start in banking at an early age, and he started at the bottom of the ladder — posting checks in the back room of a country bank in Bertrand, Nebraska. He never left the region; he just worked hard and paid attention and got lucky and kept at it.

His luckiest move was taking a job with the First National Bank of York (Nebraska), which was controlled by Elijah “Lige” Leavitt, a Russian immigrant who found his way to York in 1913 and proved to be a sharp businessman.

When Kelly arrived in York in 1965, Leavitt held a controlling interest in the bank.

“Lige was my mentor; he taught me how to conduct business,” Kelly said. “He used to tell me, ‘If you take care of the people, the profits will take care of themselves.’”

Those words of wisdom turned out to be true. Kelly’s family now owns the enterprise, renamed as Cornerstone Bank, which has spread to 33 locations in central Nebraska. 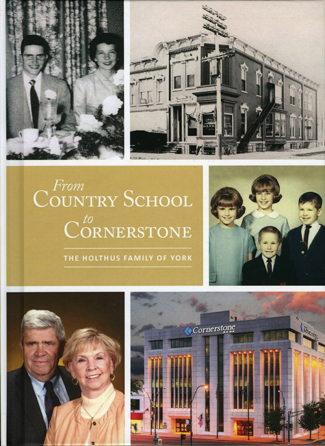 In his first couple of years at the bank, Kelly spent a lot of time in operations, then began to focus on loans virtually full time. It’s the part of banking that he feels poses the greatest challenge of all—how to avoid having a loan go bad and cause the bank to take a loss.

“I’ve had some loans that really kept me awake at night,” he said.

So how do you tell a good loan prospect?

“The loan applicant’s character, as you know it, is still the Number One factor.

THE BANK’S STEADY MOVE  forward in the field of technology continued with the installation of the first automatic teller machine (ATM) in greater Nebraska.

“I came to the bank in May of 1977 and we put one in at our east drive-in facility in August,” recalled Dale Adams. That first machine had its problems. “I spent quite a few nights there making it run; at the time it operated on its own computer, not on a network as is done today.”

“I’d bring in an application and give him my whole story of why I thought we should make the loan, and then we’d probably approve it. Afterward, Lige would come around to my desk, pat me on the back and ask, ‘You think so-and-so’s all right?’ I would say, ‘Yeah, I really do.’ Then Lige would tell me, ‘Vatch him,’ speaking with his Russian accent. He was usually right. Lige was the best student of character that I’ve ever known.”

But you can’t always be right; in the final analysis you have to take a chance. I always remind our loan officers that once in a while they will make a mistake. I don’t mind if they made a mistake and lose money, but I do mind it when they don’t follow the procedures and lose money.”

Lige was known to ask for character evaluations, in an informal way. “We’d have a senior loan meeting where we discussed loan applications,” Kelly said.

Lige was testing me, checking to see if I was alert enough to pick up on who and what he was talking about. He did that sort of thing every day. It kept me on my toes.”

Kelly got a kick out of Lige’s lively mind and sense of playfulness. “He would come into my office and say, ‘Do you think he should really do that?’ He wouldn’t mention who or what he was talking about. I would answer, ‘No, I really don’t think he should, and here’s why.’ 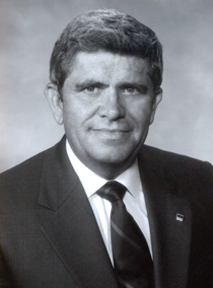 “I wanted to do this book so that my grandkids will know how our family got to where we are. If we don’t save the stories that show what it takes to succeed and what values have been important to us along the way, they may take it all for granted.”