In a sense, it all began in a hospital room. It was a sterile setting, complete with an uncomfortable bed, an uncertain future, and all the tapioca pudding a patient could eat. It seems like an odd place to develop a strong affinity for almost anything, especially a fraternal organization, but that's what happened to Virgil C. Dechant.

The Fraternalist: The Remarkable Life of Virgil C. Dechant

For nearly three decades, Virgil C. Dechant served as the supreme knight of the Knights of Columbus, an international Catholic organization of nearly two million men and their families. The Fraternalist is the first effort to fully chronicle Dechant's years leading the Order and the other four-plus decades he spent in service to it.

The book explores the unique, grassroots path Dechant took from a farmer and auto dealer in western Kansas to the headquarters of the K of C in New Haven, Connecticut. Along the way he developed close personal ties to numerous world leaders, including U.S. Presidents

This volume is the product of more than two-and-a-half years of research and writing. More than 50 people contributed stories and anecdotes, either by personal interview, phone interview, or by letter. The Fraternalist includes numerous first-person stories told by Dechant and others that explore his hands-on approach to business and personal matters. 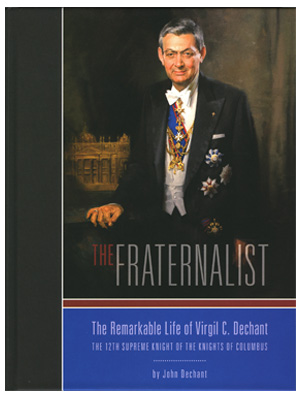 Canada, Mexico, the Philippines and Puerto Rico,” the article read.

In Hays, Kansas, Jack Schramm, alumni director of Dechant’s alma mater, St. Joseph Military Academy, which by then was known as Thomas More Prep High School, called Dechant’s election “the biggest public relations benefit ever in the history of TMP.” Schramm continued, “It is probably the highest Christian leadership post in the world that can be held by a layman.”

Dechant would return to Kansas in April for a

What Dechant never even dreamed possible—to attain the highest office of the fraternal Order he treasured so much—was now a reality. The farmer and businessman from the plains of Kansas, who had joined the Order 28 years earlier, would now lead the Knights of Columbus.

News of Dechant’s promotion spread far and wide. KANSAN IN TOP K OF C POST, read one headline from the Kansas City Star. “A Kansas native, Virgil C. Dechant, last week assumed leadership of the Knights of Columbus, an organization of 1.25 million Catholic men in the United States,

It was clear to anyone who listened to Dechant’s acceptance speech in San Juan that he had given much thought and preparation to his primary initiatives as supreme knight. He began by dedicating his administration to the Blessed Mother. And he announced his intention to launch a program that would commit the Order to increasing vocations to religious life, similar to the program he had started as state deputy in Kansas.

Both initiatives would get tested, almost immediately, at the highest level.

K of C board meeting and to attend a testimonial dinner in his honor on the campus of Fort Hays State University in Hays. Many of Dechant’s longtime friends from the Kansas State Council were there that night, as was his predecessor, John McDevitt, who spoke in praise of Dechant. Also in attendance was another mentor, the Most Reverend Marion Forst, Bishop of Dodge City, who had advised Dechant to make the move to New Haven in the first place. Dechant had stayed in close contact with Bishop Forst from New Haven, sharing letters and asking about goings on in the Dodge City diocese.

Dechant explained to the pontiff that he had dedicated his administration to the Blessed Mother and that one of his major initiatives would be a program intended to promote vocations to the priesthood and religious life.

“Before we wade too far into it, I should ask you for your blessing,” Dechant explained.

The pontiff, speaking in Italian and translated through Galeazzi, told Dechant, “What do you think you can do that the church isn’t already doing?” He was speaking of vocations.

The following January, Dechant and his wife Ann took a trip to Rome for an audience with Pope Paul VI, his fourth such trip to Rome since his maiden visit in 1971. The frequent trips had strengthened the relationship between the K of C and the Holy See; in 1973, during a board meeting in Rome, the Pope received the entire K of C board of directors in private audience and told them that they were “an immense force for good, a nation.”

Escorted by Count Enrico Galeazzi, Dechant would now be received by Paul VI for the first time as supreme knight.

But the vocations must come from your own families. They’ve got to be your children, your nieces, your nephews.”

Dechant was stunned. In one short conversation, the leader of the Catholic Church had weighed and measured his vocations idea. The verdict was clear—go for it.

“I took that to heart and never forgot it,” Dechant later recalled. “Blessed Pope Paul was a man who probably understood the church as well as any pope.”

Dechant was stumped by the question and unsure how to respond. Before he could think of something to say, the Pope came to his rescue.

“I’ll tell you what you can do,” the Pope said. “You just told me that you had 1,250,000 members. Adding in wives and children, that’s probably four million people or more. That’s twice the size of Ireland.

“If Ireland has been able to provide all these priests to mission countries for so many years, so can you—if you set your mind to it.